Rain is out of the forecast until the end of the week. A couple of cold, potentially near-freezing nights are expected.

Tonight and tomorrow: Some passing clouds may continue to move across the sky overnight, but the trend will be to clear at dawn. As winds remain out of the northwest at 10-15 mph, low temperatures will dip into the mid 30s. Counties in southwestern Mississippi will bottom out around 33 degrees. Full sun is expected on Thursday. Despite this, a refreshing 5-10 mph northwesterly breeze will continue and the high temperatures will stop in the mid 50s.

Until next time: Friday morning will see the coldest temperature in the 7-Day Forecast with many lows near freezing, especially north of Baton Rouge and the I-12 corridor. The current forecast for the city is 33 degrees. Obviously, that’s close enough that you’ll want to do light freezing preparations on any sensitive outdoor plants. Afternoon will hit the upper 50s with plenty of sun. Saturday is expected to remain dry, but clouds will increase as showers return for the second half of the weekend. A stagnant front will move into the region on Sunday, bringing periods of rain and a few thunderstorms. With that front meandering close to the coast at least early next week, scattered showers are likely to remain in the forecast. Temperatures will be slightly warmer than average due to a moisture-rich air mass lingering ahead.

Get the latest 7-day forecast and real-time weather updates HERE.

Detailed forecast: A strong surface high pressure system will move over the region through Thursday and remain through Friday. A little low-level moisture could result in some passing clouds overnight Wednesday through Thursday, but strengthening of the high-pressure area will help clear these clouds. Northwesterly winds will continue to push cooler and drier winds into the region through Thursday night. As the winds die down near that point, low temperatures will drop to close to freezing by Friday morning. Slight frost is possible, especially north of I-12. The surface maximum will be to the east of the region by the weekend, opening the area to southeasterly winds and wet onshore flow. Temperatures will climb back into the 60s. 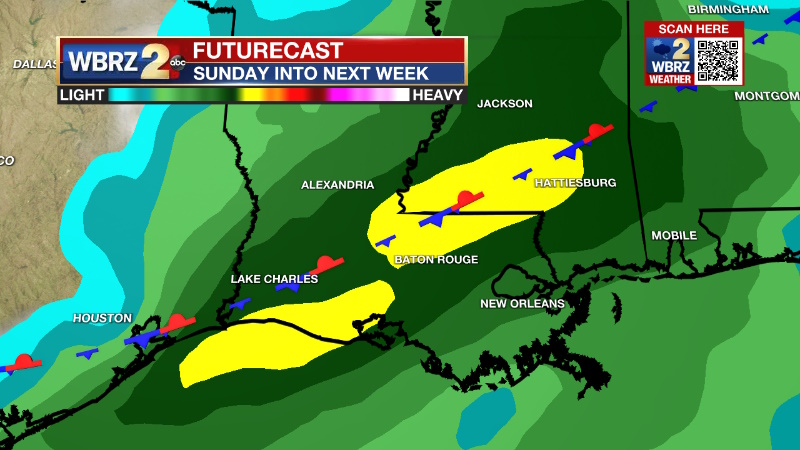 A weak upper level trough of low pressure will move into the region on Saturday night. With favorable upper-level winds on top of the increased humidity, widespread showers and a few thunderstorms can be expected Sunday. A weak front will stall in the region as it will essentially parallel the upper level winds from the southwest. With low east to southeast winds, warm, moist air will be forced over the stagnant front, keeping scattered showers in the forecast for the first part of next week. Since the front won’t move far enough south for dry, cold air to move behind it, the temperature forecast is difficult and numbers are generally expected to stay a few degrees above average. during the day and several degrees above average at night.

Storm Station is here for you, on all platforms. Your weather updates can be found on News 2, wbrz.com and the WBRZ WX app on your Apple either Android device. Follow the WBRZ weather on Facebook Y Twitter for even more weather updates on the go.